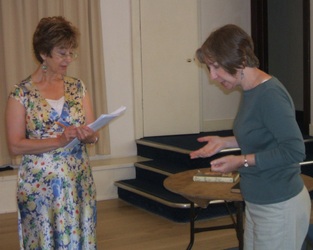 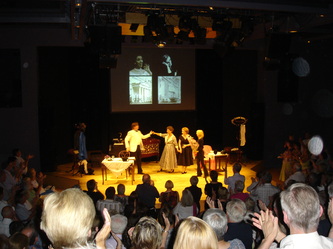 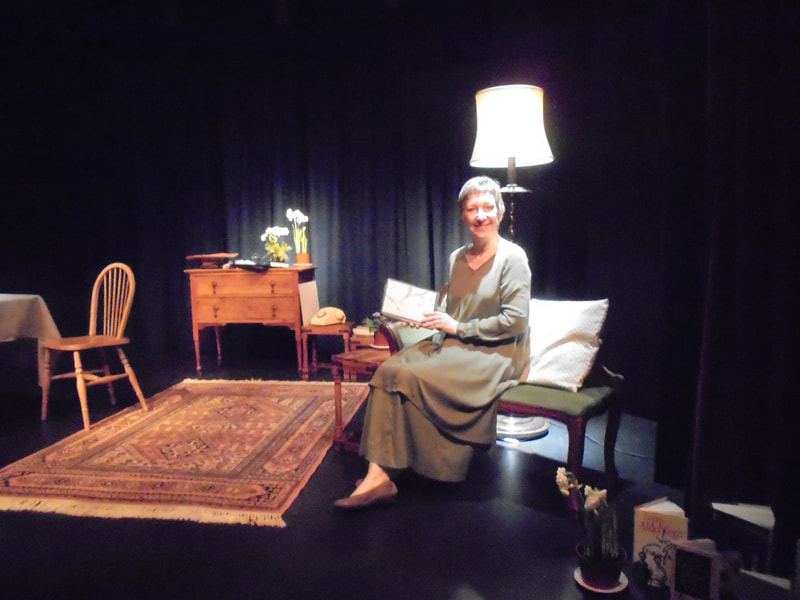 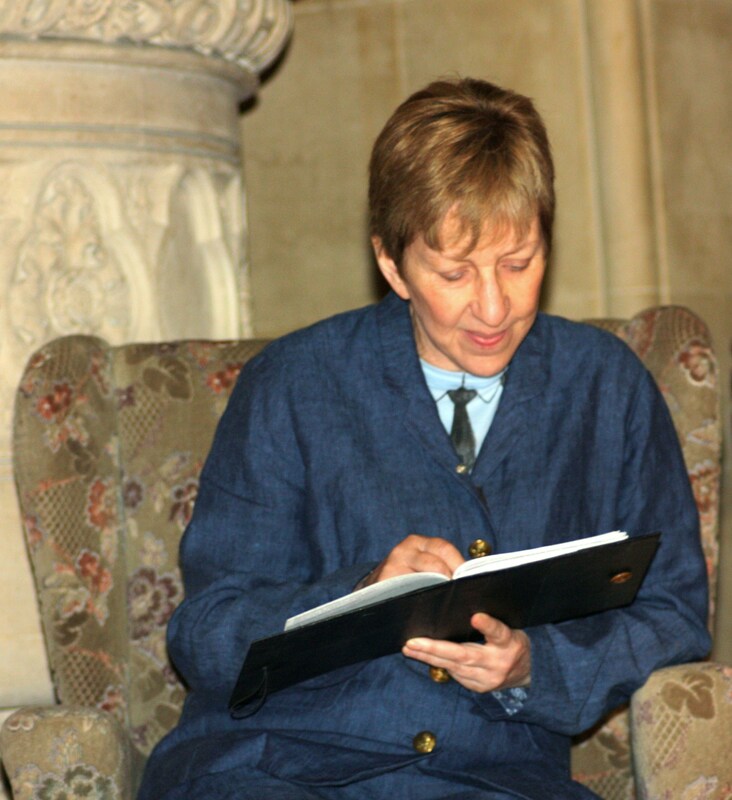 To book a performance or talk for your theatre, church, conference, private event, W.I, party etc, contact me on jane-bower@ntlworld.com

I devise and perform presentations about the lives of remarkable individuals. I also write and perform monologues to order, such as women of the Bible, and offer humorous and informative talks, illustrated with slides, about my experience of life, acting and art. Titles include Maureen Lipman's Handbag; Britain's Worst Poet Laureate (in whose childhood home I grew up); The Making of Daddy's Diaries (how I adapted a rare set of war diaries into a stage play); Brushstrokes of Faith - Reading Christian Paintings; and Faith and Art. I also give talks on the surprising 40-year background story to my latest book Thread and Thrum, and its remarkable illustrator.
​
The actress Maureen Lipman commissioned me to write a play about the relationship between the actresses Ruth Draper and Joyce Grenfell. We performed the play, My Name with Yours, at the Stables Theatre, Milton Keynes (where Joyce Grenfell once performed) on July 11th 2010, to mark the centenary of Joyce’s birth. Producer Richard Price (Oklahoma!, Mamma Mia!) offered the Ruth Draper role to his friend Meryl Streep but she obviously felt it was beyond her skills! See top line of photos above.

Comments on one-woman presentations by Jane Bower (Original letters/reviews can be seen on request)
Owed to Joyce (formerly Joyce –A Celebration) - a NEW show on the life and work of Joyce Grenfell
SEE SECOND ROW OF PHOTOS ABOVE, image 1
If ever I’m indisposed when playing Joyce I’ll send for you!
Maureen Lipman
May you go on keeping the flame of Joyce alive.
William Blezard (Joyce Grenfell’s pianist)

Having seen the ‘real’ Joyce, I still thought your show was absolutely excellent and delightful!
Buffy Milford (William Blezard’s cousin)
My husband and I thoroughly enjoyed it..…. natural – just as Joyce did it.
Janie Hampton (Joyce Grenfell’s friend and biographer)
​I don't think that I have ever seen such a finely-judged, mellifluous performance from you, ever. Wonderful work! Thrilling to watch. It wasn't just the astonishing range and depth of musical techniques; there was a consistency of emotional awareness and depths which I haven't, I think, seen presented in such fine detail.
Angela Brown, audience member
It was funny, informative, poignant and all round entertaining. What an unbelievably inspiring woman Joyce was. You had crafted the show so brilliantly, it was seamless. How you managed character singing....amazing!
Sue McKenzie - audience member
​
Daddy's Diaries       SEE SECOND ROW OF PHOTOS ABOVE, image 2 and 3
A dramatisation of my father's and grandfather's war years from diaries and memoirs
SEE VIDEO HERE: http://youtu.be/PY-LPgKk3rU

The concept and delivery is masterful. Integrity, talent and love run through it like Blackpool rock.
Diane Sammons, by text, after performance at Heron Theatre, Cumbria 10.3.2017

I don’t often e-mail strangers but feel compelled to let you know how very impressed I was with Daddy’s Diaries.
My husband and I drove 25 miles to The Stables on Sunday on the strength of having so much enjoyed My Name with Yours some years ago. We are so very glad that we did. I found myself completely wrapped up in the wonderful diaries and your sensitive and moving presentation of them. We were both entirely engaged throughout the performance and were moved by your ability to make us laugh and then switch our mood so swiftly for the many poignant moments. Your love and respect for your father allowed us to connect so fully with his experiences of wartime, of music and of love and heartbreak.
We are so grateful to you for such a moving experience.
Philippa Smith

I was so intensely moved, emotionally and intellectually, by Daddy’s Diaries….BRAVO (veracity) BRAVO (insight) BRAVO (technical production and technique). Len Bower – and those like him – still need to have their story told for new generations. Jane Bower’s researches stand substantially in the overall archive, and win continued respect.
Angela Brown

Simply stunning! We have been talking about it all morning so far.
Stephen Thornton

I had to come straight home and email you, having sat, riveted, throughout your show tonight. Everything worked - I was gripped. It was by turns funny and moving – the thread of the relationship with E was tantalising. It is something I shall not forget and I am very grateful to your father, for keeping his meticulous diaries, and to you, for bringing them to life.
Jacqui Ensom
Last night was incredible.
Your performance and the entire piece touched me on so many levels. I can't remember when I last spent time so moved by what I had seen and heard.
Gloria Milne

Its historical authenticity made it the more moving. One thing that really came across was Len’s vitality: one thing which did not come across was shallow patriotism. I noticed no hatred of Germans, even when his friends were killed. You chose to use his innocent language for our amusement and light relief, and that certainly worked in the piece overall. I went home thinking, "I will never think of the war generation in a lump again; each person's experience of the war was unique."
Hannah Stone

My Name with Yours: a double portrait of Ruth Draper and Joyce Grenfell (with Maureen Lipman)  SEE TOP ROW OF PHOTOS, above
Your Doctors and Diets was masterly. I should have known from the quality of your writing that your acting would be as good. Drama is the best therapy I know and talent is always thrilling. Bravo.
Maureen Lipman

I was hugely pleased at the reaction on Sunday and you are to be warmly congratulated on the way you played Ruth alongside one of our great comediennes.
Richard Price, producer

I thought you did a brilliant job in putting the show together, giving the audience all the salient facts about Ruth and her way of life. The section on de Bosis was excellent and very moving. I learnt a lot about Ruth that I didn’t know…. It was amazing to see the monologues ‘on their feet’ for the first time too. The Actress was particularly brave; your mastery of the cod-Slavic was remarkable. Congratulations again for such a remarkable feat.
David Benson, actor, and producer of Radio 4 programme on Ruth Draper

Just a quick note to say how very much we enjoyed My Name With Yours last night. It was clearly a triumph.  We alternated between laughter and tears throughout.  You were a wonderful Ruth Draper and captured the essence of her stage presence brilliantly. And that comes from the two of us who saw not only Ruth Draper but many Joyce Grenfell performances.
Dick Chapman, personal friend of Ruth Draper

A massive well-done to you for conceiving, writing, starring-in, and getting My Name With Yours in front of an audience. I had no idea how it would go down with the audience last night and was amazed by your perspicacity! I very much enjoyed working with you and look forward to the next time!
Michael Haslam, pianist, My Name with Yours

A Letter from Paul   SEE PHOTOS BELOW
A dramatised version of St. Paul’s Letter to the Romans, commissioned by Cameo Theatre for the Millennium - a serious yet humorous approach)
….an intensely dramatic interpretation. The whole evening was a delight…For me – and surely for all the audience – Phoebe had come out of the shadows, and light had shone too on Paul and on the profound meaning and importance of his letter.
Ann Phillips, Fellow Emerita, Newnham College, Cambridge

Congratulations on a mammoth effort – your technique is excellent, the line between reading and telling is often impossible to discern. Thankyou and good luck.
Alan Bennett

Thank you so much for coming last Thursday for the excellent letter from Paul. It was a really good dramatisation and I have heard nothing but positive comments about it.You had a great knack of blending the humour just when Paul was getting too heavy, and making scripture, context and understanding mix together.
Revd Canon Tim Sledge, Vicar of Romsey & Area Dean of Romsey

I thought your 'A Letter from Paul' was very impressive, and helpful in understanding Romans. Your choice of phrase to make it speak to today's audience was excellent. An enormous amount of work had clearly gone into wrestling with every sentence. Beautifully done.
Reverend Derek Wales after performance in Romsey Abbey, 23.10.14


To book a performance or talk, contact me on jane-bower@ntlworld.com